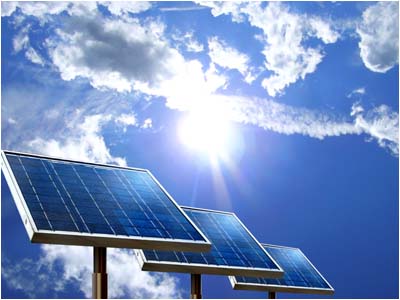 The photovoltaic panels have two main problems: an efficiency which is still very low and makes the produced energy not very cheap, and the difficulty to store electricity.

An American engineer at Duke University, North Carolina, has created a system of solar panels capable of transforming a mixture of water and methanol into hydrogen, to be used immediately thanks to a fuel cell, or to be stored in a tank and then supply the fuel cell when needed, at night or winter, for example.

The company Electronica Santerno had on sale up to a few years ago a fuel cell converter capable of converting electric energy produced by the panels into hydrogen, which was then used to return energy whenever low solar radiation occurred. All these systems are devised for trying  to compensate the production changes that PV systems unfortunately have.  IMO I say that a good solution could be the immission of energy into the power grid through smarter energy networks, able to equalize the global energy consumption.I recommend to read, for  a better understanding, “Hydrogen Economy” by  Geremy Rifkin: I think some concepts therein are really interesting and innovative.